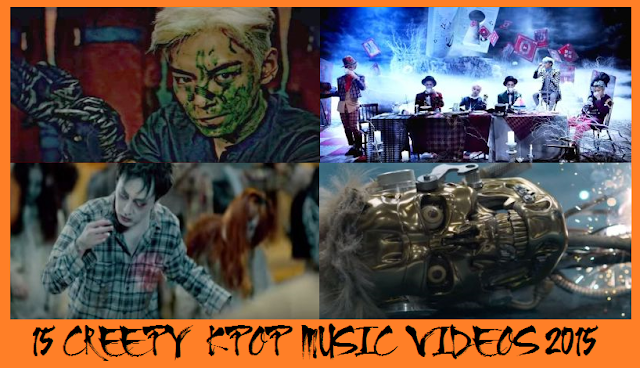 Welcome to TuneN2IM’s list of Creepy Kpop Music Videos Volume 7! Long time no see, even though this site is still in hiatus mood, I could not let this year roll by without keeping up with tradition. 2015 went pretty light with the videos this year, even our good buddies VIXX went easy on us so far this year. However, we still managed to gather at least 15 videos that are appropriate for this playlist. Check them out!

Bastarz – “Zero for Conduct” April 13, 2015
Cannibals? check. Vampires? check. However, we all know the scariest thing for students is getting a Zero.

Shinee “Married to the Music” Aug 2, 2015
Have you heard the legend of "The headless idol"?

WAX – “Not My Mind” Oct 7, 2015
Just casually third-wheeling in his relationship takes a dire turn.

Not released yet, but I have some expectations for new group VAV since they claim to be vampires and werewolfs. Their showcase is October 31st.

I'm sure this would be better with an actual music video.