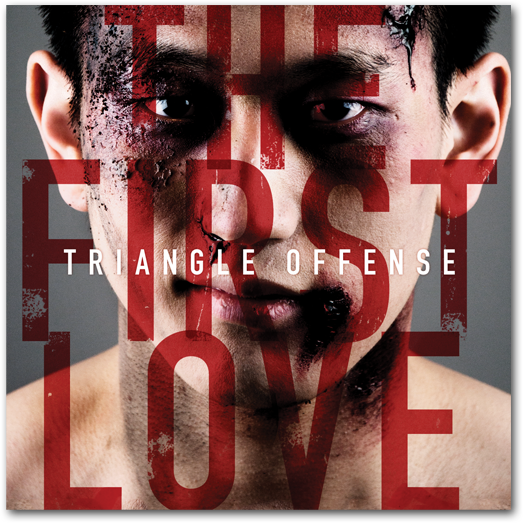 Jersey City, NJ -- Electrohop group Triangle Offense (TO) released their newest mixtape project The First Love as a free download on their website.  (www.triangle-offense.com) The mixtape features their signature style of clever, lyric-driven rap over a selection of hip samples and original, drum and synth production.  The First Love is the second chapter in a trilogy following their debut The Courting, continuing the story arc based on love and relationships.

"The story continues where we left off on 'The Reeling,' the last song on The Courting. As the story progresses and situations arise, we do our best to put you in those places with our music," explains TO member Sci.  "We have our own interpretation of the story, but we want listeners to make up their own."

TO has a history of putting their own spin on both mainstream and indie hits having rapped over artists' songs ranging from Cut Copy to Ryan Leslie to The xx.  They continue the trend on this project with samples like Janet Jackson's "When We Oooo," New Look's "Numbers," Toro Y Moi's "Sweet," and a New Jersey take on Azealia Banks' "212" entitled "201."  They teamed up with Jersey City producer Nemobeatz for the other half of the tape, creating high energy, synth driven songs like "You Know The Name" and "Love It."

"We've all known each other for so long, it's just like making dinner with your family," Nemo explains.  "For the most part we're on the same wavelength creatively, but like with family, sometimes we bump heads.  One thing we can always agree on though is all wanting the best product possible."

Other original songs like "Eyes Open" featuring Mitchel Grey front-man Ryan Bandong and "Beautiful Stars" featuring Nightlight show TO's dedication to make music that can be danced to while respecting their lyricist roots -- a style they've dubbed "contemplative club music."  When asked what his favorite song on the mixtape was, Sci said, "Without a doubt, 'Beautiful Stars.' It's the track where every TO member shows who they are as people, rather than just musicians or artists. I wrote the hook for someone dear to me, who helped me through some of my toughest times. It's my 'thank you' to that person. We all have someone like that in our lives. It's important to let them know that they are appreciated."

TO previously released a music video for their single "It's All Good" ( http://youtu.be/juwe3kFvHO4?hd=1) as well as a trio of promotional songs that found their place as bonus tracks on The First Love.  (Youtube: http://www.youtube.com/user/trioffensemusic)

The group plans on celebrating the release in their hometown of Jersey City by inviting all their fans to a party on July 27th at Space Station, an art space in the downtown neighborhood.