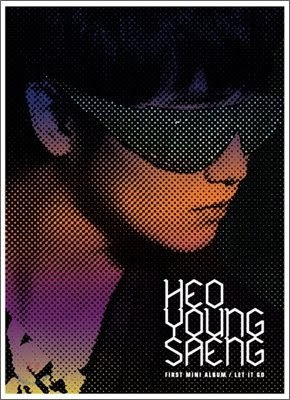 Being recognized as the lead vocal of SS501 with a beautiful voice! Explosive singing ability and his own style of dance ability different from others!SS501’s lead vocal Heo YoungSaeng’s very first mini album “Let It Go” is to be released and Heo YoungSaeng will stand in front of the public as a solo singer. 7 years after debut, not as a vocal of SS501, nor as a member of SS501, you can listen to Heo YoungSaeng’s own story in this mini album “Let It Go”, which contains both dance and ballad, coexisting with harmony, making listeners feel rich in the ears.Title song “Let It Go” is by Sweetune, talking about a different way of love between male and female. A cold guy who is indifferent in front of love, Heo YoungSaeng sings with his unique refined beautiful voice, completed with 4minute HyunA’s sensual rap expressing a female’s desire for love.Taewan, who co-made singer Rain’s album, participated for this fast tempo American club dance song “Out The Club”. Heo YoungSaeng wrote the lyrics to the trendy analog synthesizer and drumbeat, harmonious song “I’m Broken”. SS501 member Kim KyuJong as featured rapper in the lyrical melody and sweet mellow guitar tones“Rainy Heart”. Mini album contains 5 tracks including “Let It Go”instrumental, and a 28-page album jacket, where you can feel singer Heo YoungSaeng’s diverse charms. The album release date was being postponed in April due to an injury during dance practice. Heo YoungSaeng is prepared to soar, spreading the soaring wings which was put aside for awhile and in order to reach to the top, his future moves are drawing attention.Tracklist• 01. Out The Club (Ft.Tae Wan)• 02. Let It Go (Ft.HyunA)• 03. Rainy Heart (sub-title: That day when it rained) (Ft.Kim KyuJong)• 04. I’m Broken• 05. Let It Go (Instrument)
Source : yes24.com + (English Translation) xiaochu @ Quainte501.com
asian news s.korea tracklist