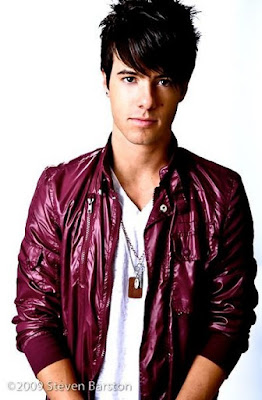 “ Travis Michael Garland (born July 26, 1989) is an American singer-songwriter. He is best known as the lead singer of the boy band NLT. Garland is now working on his solo career.

Growing up in Lubbock, Texas, Travis Garland was exposed to the arts at a very young age. He started off singing and acting in plays at his church and went on to attend the School For The Performing Arts in junior high where he received extensive training in music and theater. After winning a nationwide acting competition at the age of 14, Garland relocated to Los Angeles where he signed with a manager and agent. He began going on auditions during the day but spent his nights developing his songwriting, and after a chance meeting with a friend from Dallas he was asked to join the pop/R&B group, Not Like Them.

A few years later, NLT was signed to a major label deal working under the direction of Geffen Records Chairman Ron Fair. With Garland as the frontman and one of the lead singers, NLT was put in the studio to collaborate with top producers and songwriters including Pharrell, Ne-Yo and Ryan Tedder. The group opened on tour for The Pussycat Dolls and gained a small, but loyal, fan following. In 2007 NLT released their Timbaland-produced single “She Said, I Said (Time We Let Go)” and scored their first Top 40 Hit. They continued to tour, and caused a female fan girl frenzy headlining a national House of Blues tour aptly titled “The 2009 Bandemonium Tour” along with V Factory and Menudo. When the group eventually parted ways to pursue individual opportunities Garland shifted his focus back to songwriting, only this time for a solo album.

Currently, Garland is back in the studio recording his as-yet-untitled debut album for Interscope Records under the familiar direction of Fair. To give him a unique urban pop sound, producer Nate “Danja” Hills (Justin Timberlake, Nelly Furtado, Britney Spears) has signed on to produce the record. Garland will be writing and co-writing the majority of the album’s tracks himself. Garland’s debut album is scheduled for release later this year with “Believe” as the first single. Recently Travis stated on his twitter account that there’s an song called “Uncomplicated” that will be on the album as well.

Garland is now represented by JT Entertainment according to his Myspace page and is said to be working on his debut solo album. In fact, it was through Myspace that Garland was introduced to Perez Hilton. Hilton “was instantly blown away”. Songs written or demoed by Garland can be viewed on youtube, including “Glow Stick”,”Stranger”, “Your Way or the Highway”, “I Want It All”, “Saving My Life”, “Let Me Know”, “Stranded”, “Can’t Believe it” (featuring Kevin McHale and RAS), “When You Learn How To Love”, “Twilight” and many more. Garland also covered Beyonce’s “Sweet Dreams” and T.I. & Justin Timberlake’s “Dead and Gone”. Garland demoed a song titled “Sexy Together”, but passed on it; the song was eventually modified by its producers and was then sold to Justin Bieber under the title of “Never Say Never”.
Garland premiered his debut single, the Danja produced “Believe” on American Idol on May 19, 2010 which was on the same day as Justin Bieber’s American Idol performance. The single was released on iTunes the day before, and his debut album will be released on Interscope later this year.

On June 11, 2010, Garland released a cover of the song titled “Airplanes” by B.O.B featuring Hayley Williams on youtube, which he dedicated to a fan who had lost her sister to cancer; a free download link was provided on Perez Hilton’s website. “